Earlier this year, Intel announced three iterations of its 12th-generation Alder Lake CPU architecture for laptops: the U-series, which covers thin-and-light Ultrabooks, the P-series for thin-and-light workstation laptops, and the H-series for beefier workstations and gaming laptops with more room for large processor fans and heatsinks.

Now, Intel is adding one more series of chips: the HX series, designed for even faster laptops. Despite sharing a letter with the H-series chips, the H and HX CPUs don’t have a lot in common. The H-series chips are scaled-up versions of Intel’s laptop processors with beefier integrated GPUs, integrated Thunderbolt, and a built-in chipset controller on the same package as the rest of the CPU. The HX chips, on the other hand, use the same dies as Intel’s desktop Alder Lake chips, but are soldered to a laptop’s motherboard rather than inserted into a CPU socket.

These CPUs have higher TDPs than their H-series counterparts, with 55 W base TDPs instead of 45 W and 157 W Turbo TDPs rather than the 95-to-115 W TDPs of the H series. The power increase means these chips will run faster for longer than H-series processors at the expense of higher power consumption and heat output. However, our testing of these desktop chips suggests that the Core i7 and i9 processors will benefit more from the boosted power limits than the lower-core-count Core i5 versions.

Being a scaled-down and repackaged desktop chip offers some benefits and drawbacks compared to regular H-series laptop processors. On the positive side, the Core i7 and Core i9 chips offer an additional pair of P-cores and eight efficiency cores, for 16 cores and 24 threads. As long as your laptop can handle the extra power requirements, these should be helpful for CPU-heavy productivity and rendering tasks.

These processors also support PCI Express 5.0, though there’s not much of a point to it yet—current GPUs and SSDs don’t use the new standard yet, and won’t for a while. They also support memory overclocking, the same as their desktop counterparts, and the vPro-compatible versions support ECC memory as well. 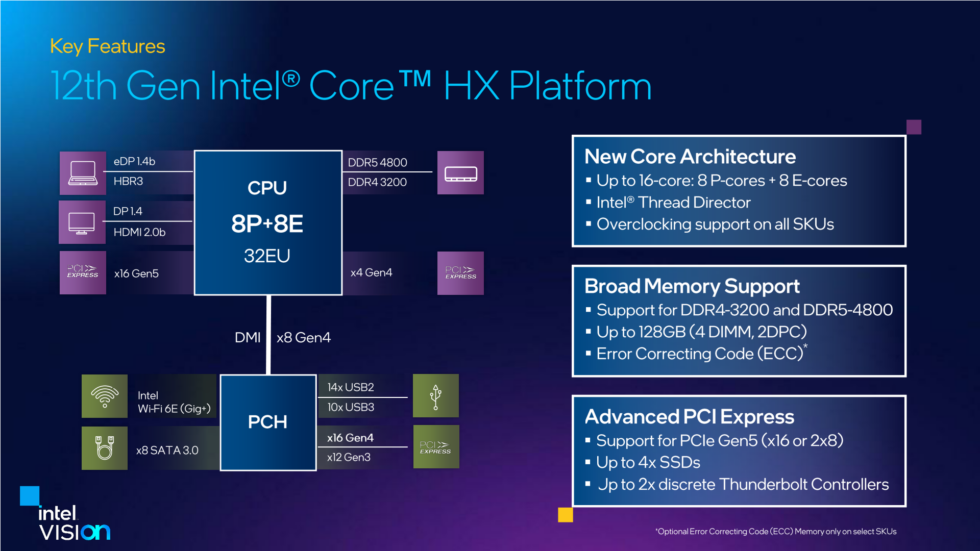 Enlarge / The HX-series chips offer the same features (and drawbacks) of Alder Lake desktop chips, which means you do get PCIe 5.0 but you don’t get built-in Thunderbolt.

Whether the drawbacks bother you will depend on what you’re doing. The chips’ integrated GPUs top out at 32 execution units (EUs), down from a maximum of 96 in the H-series CPUs. Laptops with HX processors are near-certain to include dedicated GPUs, which usually won’t be a big deal, but the CPUs’ lack of integrated Thunderbolt 4 connectivity is more glaring. Up to two dedicated Thunderbolt controllers can be added, but that increases cost and complexity.

The Core i7 and i9 HX-series chips could make some sense for people who need all the CPU performance they can get in a laptop, but the oddball Core i5 HX offerings are probably best avoided. They include just four P-cores and either four or eight E-cores, no more than the regular H-series chips, and at these core counts, they’re unlikely to benefit much from their boosted TDPs.

Intel didn’t give a specific availability date for laptops with HX-series CPUs but said that “more than 10 workstation and gaming designs” would be coming from the PC companies “this year.”

Looking at the specifications of the seven new Alder Lake-HX series SKUs, it has two new Core i9, three Core i7, and two Core i5 models, each with a base TDP of 55 W and a maximum (turbo) TDP of 157 W.

The top Alder Lake-HX SKUs are the Core i9-12950HX and the Core i9-12900HX chips, with virtually identical specifications, including eight performance cores and eight efficiency cores for a total of 16C/24T. Both have a base core frequency of 2.3 GHz on the performance (P) cores and 1.7 GHz on the Efficiency (E) cores, with turbo frequencies of 5.0 GHz (P cores) and 3.6 GHz (E cores).

Both Core i9 models include 30 MB of L3 cache a 32 EU iGPU. It’s likely due to the regression in graphics hardware from the existing 12th Gen Core H-series parts that Intel intends that manufacturers use discrete graphics for the best possible gaming and workstation performance.

The only difference between both these models is the Core i9-12950HX has the capability for Intel’s vPro functionality designed for industrial and enterprise use cases, including official support for ECC memory (which isn’t to be confused with the on-chip ECC on DDR5 memory).

Finally, and perhaps most surprisingly, Intel is also minting a pair of Core i5 HX-Series SKUs, the Core i5-12600HX and the Core i5-12450HX. The Core i5-12600HX supports Intel vPro technologies, including ECC memory support, and it has four performance and eight efficiency cores (12C/16T), 18 MB of L3 cache, and a 32 EU iGPU. By contrast, the Core i5-12450HX has four performance and just four efficiency cores (8C/12T), along with 12 MB of L3 cache, which might not be optimal for gaming with discrete graphics compared to the other models. And, cementing its status on the bottom of the stack, it has just 16 EUs for its iGPU, one-third as many as its regular H-series counterpart (12450H).

Lining up the new HX-series parts side-by-side with their existing H-series counterparts, it’s especially clear that CPU cores and EUs are the only thing differentiating the two parts in terms of performnace. All of the i9/i7 HX parts have more CPU cores than their H counterpart – typically 2 more P cores, though instead the 12650HX ends up with an equal number of P cores and 4 more E cores – at the cost of integrated GPUs that offer half as much performance (or less). P core turbo clockspeeds are equivalent here, so the extra TDP isn’t unlocking higher peak frequencies, and the HX-series parts actually have slowly lower max clockspeeds on the E cores despite the TDP advantage.

Meanwhile the i5 parts are the real oddity. The HX-series doesn’t come with any additional CPU cores in these configurations, so outside of a 100MHz more on the P core turbo for the 12600HX, on paper there isn’t any significant advantage to the i5 HX parts. If anything, it’s difficult to argue that the HX parts aren’t a downgrade here.

As noted earlier, since Intel is using their disaggregated desktop design here, the Alder Lake HX-series requires a separate PCH to provide the rest of it’s I/O functionality. Here Intel once more uses a PCIe 4.0 x 8 DMI link between the processor and the chipset.

But at the same time, one of the key advantages of being derived from Intel’s desktop hardware is that the Alder Lake-HX series is the first PCIe Gen 5.0-enabled platform for mobile. Each Intel Alder Lake-HX series processor benefits from a total of 48 PCIe lanes, with 16x PCIe 5.0 and 4x PCIe 4.0 lanes hanging off the CPU itself, and another 16x PCIe 4.0 and 12x PCIe 3.0 lanes coming from the PCH. As with the original desktop hardware, the 16x PCIe 5.0 lanes are intended for discrete graphics, while the CPU’s PCIe 4.0 lanes will be used for NVMe-based storage devices.