With the new Mac Studio and Studio Display, Apple has essentially told enthusiasts and professionals that if they want higher-performance computing, they’ll need to move on from the 27-inch iMac all-in-one. That means buying two separate products that are made in two separate locations, shipped on two separate planes and trucks and arriving in two separate boxes.

If you’re an enthusiast or pro who is looking to maximize performance while minimizing your climate impacts, that doesn’t seem to be a winning combination. But according to Apple’s environmental reports, the combination of a Mac Studio and Studio Display produces nearly 50 percent fewer carbon emissions over its lifetime than the iMac Pro.

How did that happen?Apple hasn’t said much beyond what was mentioned at the keynote and what’s in the environmental reports. But by diving into the reports, we can begin to understand where the company made improvements and where it might have gotten better at estimating its own footprint.

Apple, along with several other computer manufacturers, releases reports about the environmental impact of its products. These reports are usually created by experts within the company who query its supply chain and run the data through sophisticated models. The entire process is called life-cycle assessment, and one of the results is often a product’s carbon footprint, or how much carbon dioxide equivalent (CO2e) it produces over its lifetime.

Life-cycle analysis experts collect data from suppliers, calculate how much pollution different electric grids produce, and estimate how much energy it will take to recycle and dispose of the products when they reach the end of their lives. Approaches may vary, but most companies follow a pair of ISO standards to generate the reports.The figures are not perfect, and ideally, companies will report the uncertainties of their estimates. (Apple, unfortunately, does not.) Typically, these reports are audited by third parties paid by the company. Apple’s description of its methodology doesn’t use the word “audit,” though, instead saying that its “data and modeling approaches are checked for quality and accuracy by the Fraunhofer Institute in Germany.” That’s probably something like an audit, but it’s a curious omission.

In a perfect world, life-cycle assessments would be audited by an independent organization that doesn’t have a financial relationship with the manufacturer. That’s obviously something the industry should strive for, but the status quo is better than nothing.

To see how Apple might have trimmed the Mac Studio’s and Studio Display’s footprints, let’s start by comparing the products with the iMac Pro. The Mac Studio with display is a likely upgrade path—the iMac Pro was targeted at similarly pro-leaning consumers who wanted more power than the regular iMac but didn’t need the monster Mac Pro. Plus, the iMac Pro was introduced nearly four years ago, and it might be starting to show its age for early adopters. Apple coincidentally assumes that its macOS products will be used by their first buyers for four years.

Apple estimates that, from cradle to grave, the iMac Pro is responsible for 1,468 kg of carbon pollution. Slightly over half that comes from the electricity used to power it, and 40 percent comes from its materials and production. Shipping the computer contributes another 4 percent, and recycling and disposal account for the final 1 percent.

The combined footprint of the Mac Studio and Studio Display, on the other hand, is 806 kg. That’s a whopping 45 percent less than the iMac Pro. 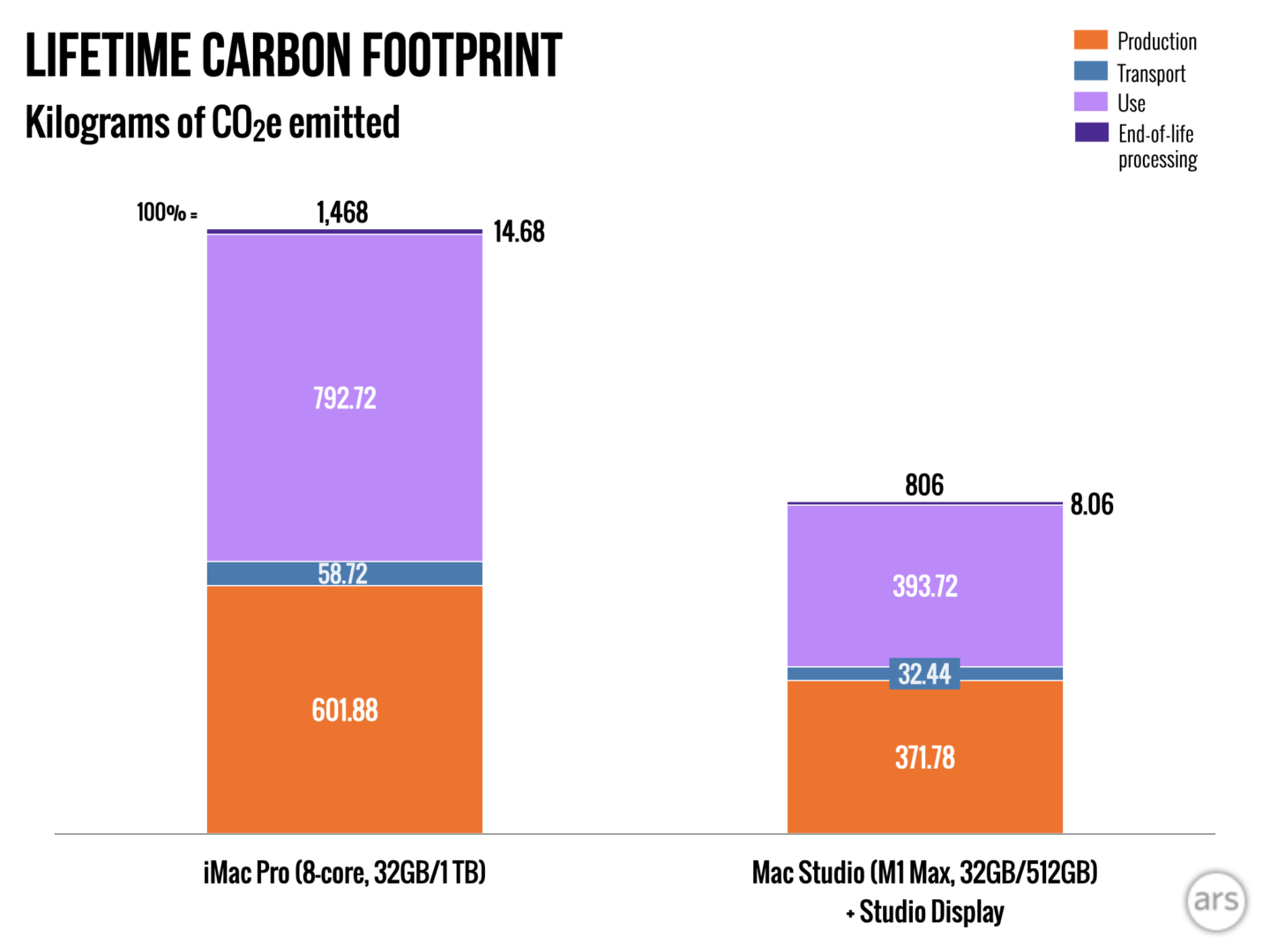 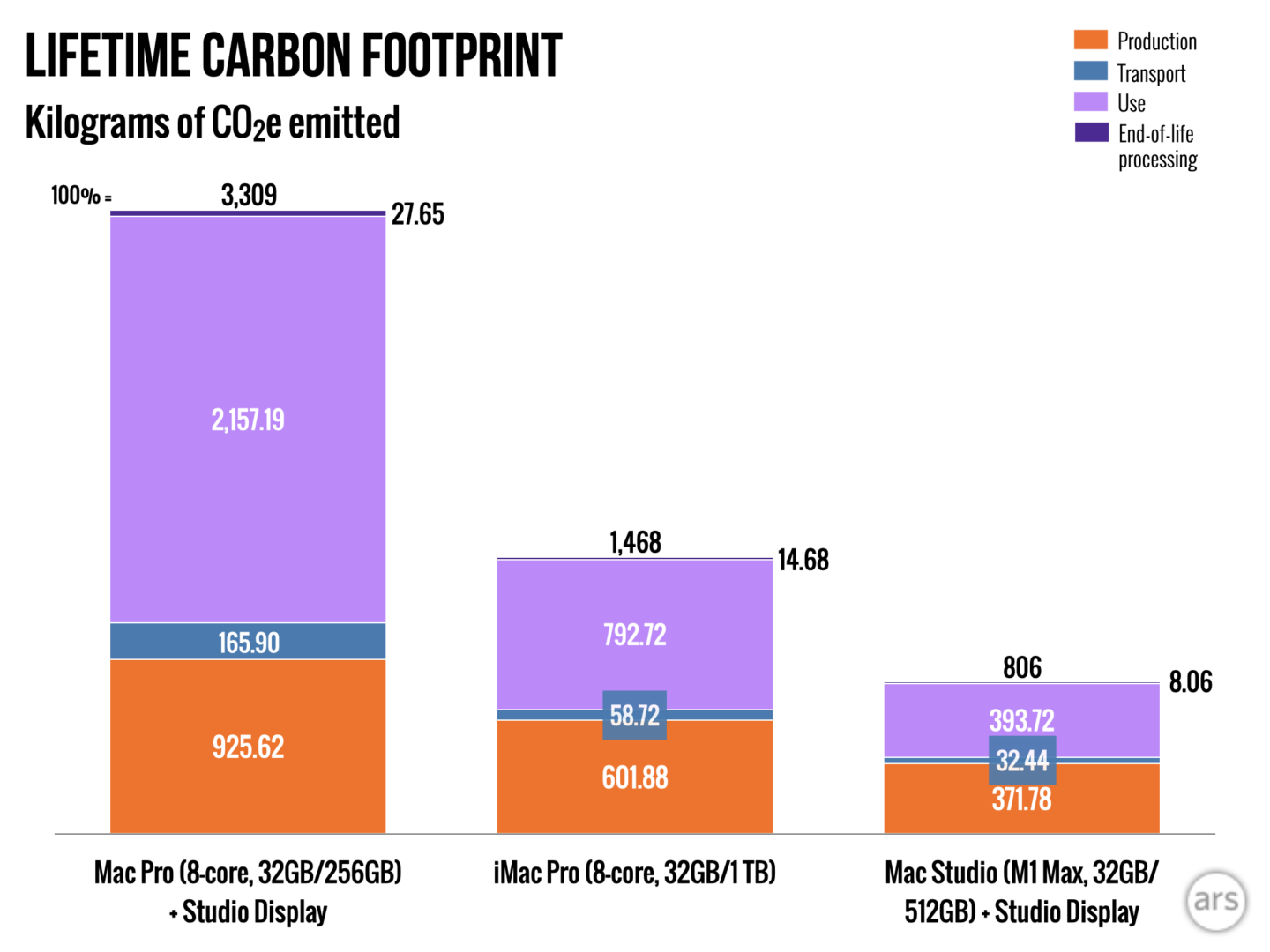 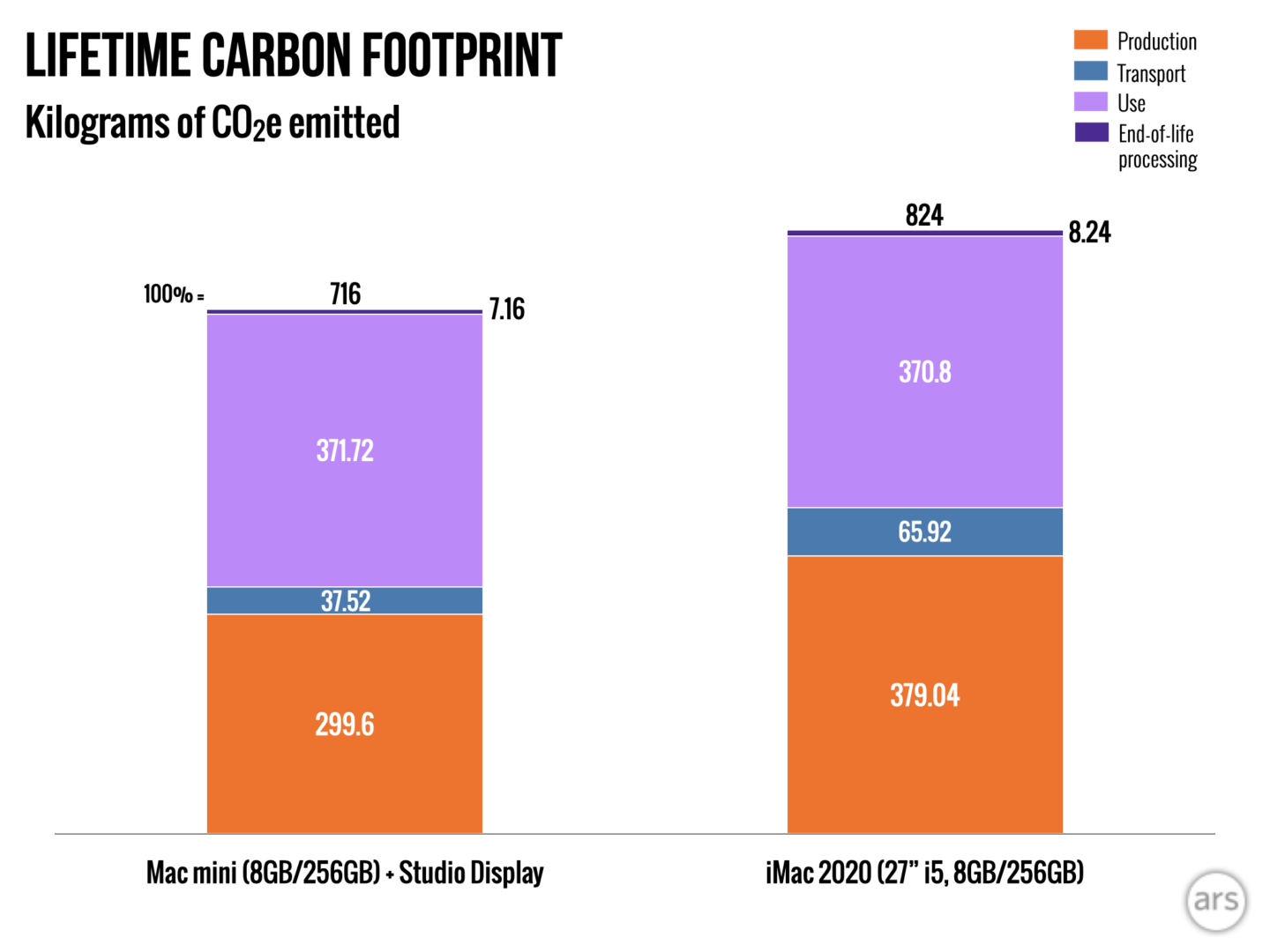 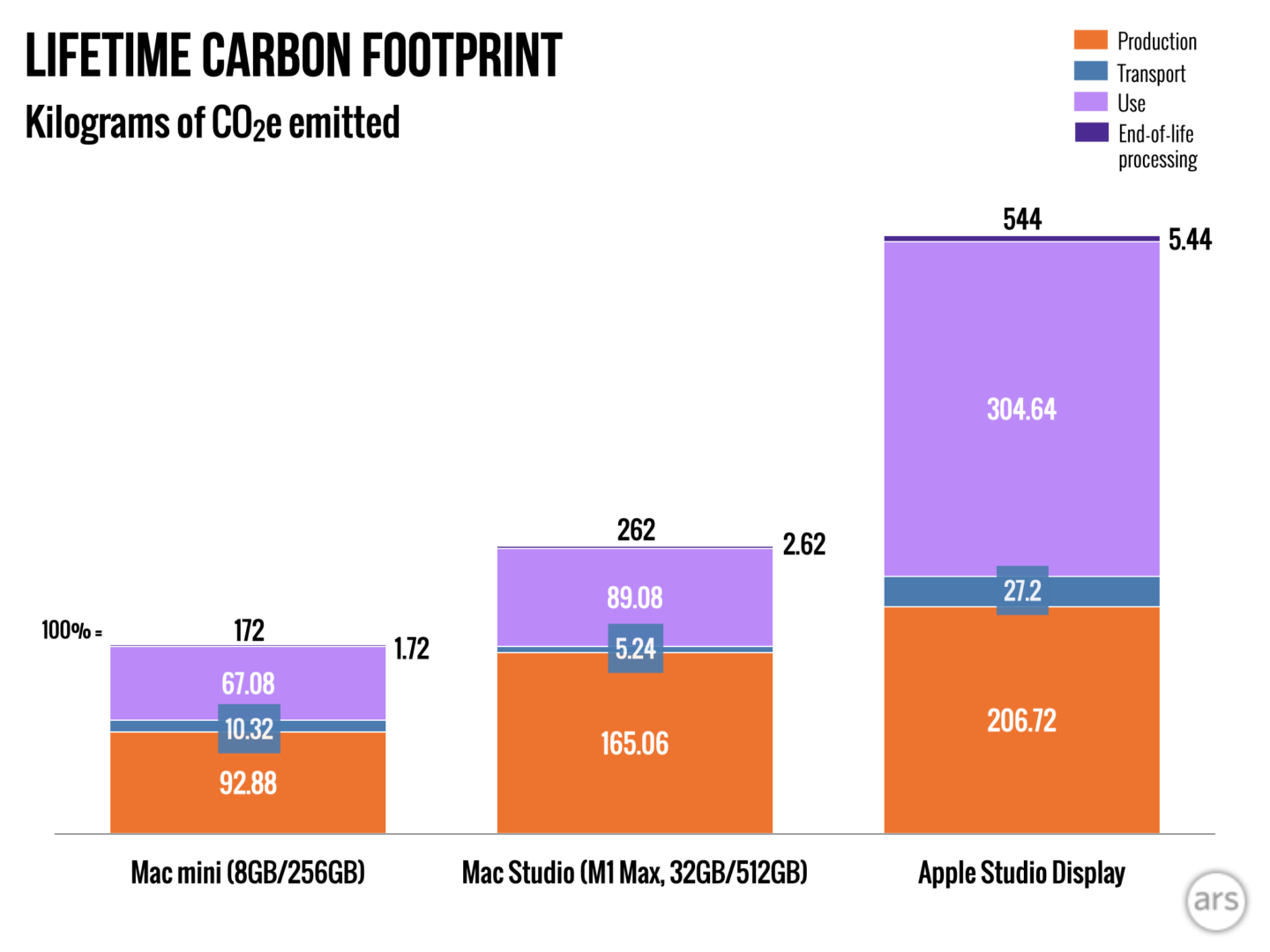 Physical materials might account for some of the decrease—the two together weigh about 8 percent less than the iMac Pro. Another factor might be the use of recycled materials. Apple’s brushed metal aesthetic relies on aluminum, a carbon-intensive material. The iMac Pro was made from virgin bauxite ore, while both the Mac Studio and Studio Display contain a significant amount of recycled aluminum (the desktop’s enclosure is 80 percent recycled aluminum, while the display’s stand is all recycled).

Another reason for the new devices’ lower combined footprint could be the size and number of chips. Semiconductors are small, but making them requires a lot of electricity. Fabs also tend to use etching and cleaning compounds that have high global warming potential. One of them, nitrogen trifluoride, warms the atmosphere 17,200 times more than an equivalent amount of carbon dioxide over 100 years. Fabs try to recycle or process as much as they can, but some likely escapes. For computers, the use of fewer and smaller chips often translates into a smaller carbon footprint.

Compared with the Mac Studio, the iMac Pro has a relatively large logic board, and its Xeon processor and AMD Radeon Pro Vega 56 GPU are pretty big chips. The Xeon is a 52.5 mm x 44 mm chip, or about 2,360 mm2, and the Radeon is only slightly smaller. The M1 Max, which contains both a CPU and GPU, is only about 420 mm. Why the shrink? It probably comes down to a mix of design choices, including the SoC approach and TSMC’s 5 nm process.

To see just how much of an impact chips can have, look at the higher-end Mac Studio configuration with the M1 Ultra, 64GB RAM, and 1TB of storage. Apple says the machine’s carbon footprint is 375 kg, or 43 percent larger than the base model. The difference is almost certainly the chips—the only other significant difference is the M1 Ultra’s heat sink, which probably lowers the footprint since it’s made of copper, a metal that is less carbon intensive than aluminum.

We haven’t seen the inside of the Studio Display yet, but its main chip, the A13, is relatively small at 98.48 mm.

The Mac Studio and Studio Display also pull ahead of the iMac Pro in terms of energy efficiency, using 50 percent less power. No surprise there. Compared with equivalent Intel chips, the M1 Max draws far less power for a given amount of performanc

The other major category of emissions—transportation—reveals an unusual discrepancy. Despite arriving in two separate packages, the Mac Studio and Studio Display produce 45 percent less carbon pollution than the iMac Pro. While we don’t know exactly why that is, there are a couple of possible explanations. One is that Apple reduced the size and weight of its packaging so it can fit more into each cargo plane. Another is that the company has better data today than it did a few years ago, and that data suggests that pollution from shipping is lower than previously estimated. It’s possible that Apple has updated its data internally for old products, and the company has been known to reveal those updates in future product reports. But given that the iMac Pro has been discontinued, it’s unlikely that will happen.

We’ve reached out to Apple for additional information and clarifications, and we’ll update this article if we receive a reply.

Overall, the savings in each category add up. Despite being two separate products, the Mac Studio and Studio Display have a dramatically lower combined carbon footprint than the iMac Pro. The pair also stacks up nicely with other upgrade paths and alternative purchases. A base Mac Studio with a Studio Display is nearly dead even with last year’s base 27-inch iMac, despite having far more power. And compared with the Mac Pro—with or without display—the carbon footprint for the combo is at least a third lower.Plus, the Mac Studio and Studio Display come with another environmental upside—when the computer starts to show its age, you don’t have to replace the display at the same time. After all, not buying something new is one of the best ways to trim your footprint.